I’ve been writing for as long as I can remember. When I was about eight or nine, I wrote a story as an entrance exam to a children’s writing institute. I cannot begin to explain to you the joy I felt when I received the acceptance envelope. I am aware now that they probably wanted everyone that took the entrance exam; after all, that was how they made their money, right? The enrollment fee was far more than my family could afford, however, so I was unable to attend. I remember this as one of the most heart-breaking experiences of my childhood.

I did not give up writing, though. In high school, I wrote continuously, and took as many writing and literature classes as my school offered. I had high aspirations of becoming a journalist. I wanted to be the woman sitting in front of the camera doing the evening news or the woman with her own newspaper column. My dream was to go away to a college that had a superior journalism department. Because of my poor grades and a few other issues, I didn’t attend college, though.

Immediately after graduating high school, I began to work in an office as a secretary. I continued to write on my typewriter at work when there was free time. I actually wrote a 500-page Christian Romance novel but upon its completion decided it was no good. I burned it in the fireplace at home, and have regretted it ever since. This was before the days of home computers and none of what I had written was saved on disk. I consider this one of my greatest professional learning experiences. 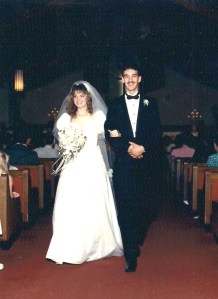 I married and started my family. I continued to write Christian Romance but publication eluded me. Submitting manuscripts or even simple proposals was a time-consuming and expensive hobby. I took a break from writing for a few years because motherhood (my second child had come along) kept me busy. However, my mind never stopped spinning tales. These ideas gathered in file folders and patiently waited to come out when my children went to school.

Then, God called me to homeschool in 1997 and suddenly my plans were postponed for just a little while longer. After I got accustomed to the routine of homeschooling, the writing bug bit me again. Instead of fiction, I wrote articles for homeschool magazines about homeschooling and finally got my first phone call from an editor. I can still remember where I was and what I was doing when that call came in.

So I kept at the writing and got a few more articles published. I took a two-year writer’s course through the Christian Writers Guild and eventually wrote a few Bible studies, which I taught for groups at church. Then I wrote a devotional for homeschool moms, which I self-published.

I have spoken to homeschool groups and church groups for several years now and I enjoy it. However, writing is my love!

So throughout the years of teaching my children, God refined my writing skills. I wrote several more Bible studies and three novels. Because of easier submissions procedures, I submitted proposals constantly. But the ever-coveted contract never came. I even tried to find an agent multiple times, but had no success. I also tried to quit writing quite often, but had no success at that either.

I attended my first writer’s conference in 2003 and met several editors, who requested to see manuscripts. Although I didn’t make a connection with an agent or editor then, I did make a few connections with other writers who taught at the conference and we still talk today.

Eventually, I found a publisher who was interested in publishing my books. To Dance Once More released in 2011 and Song of the Meadowlark released in 2012 through this publisher. In the fall of 2012, I requested my rights back from my publisher. I have since become a hybrid author and republished those two novels plus four more. I’ve also been published by Barbour Publishing. Writing is my favorite pastime!