I’ve been spending most of my free time over the last couple of months working on projects around the house. I scanned all the photographs in my photo albums into my computer and threw out those bulky books. I’ve also spent most nights and weekends since Christmas playing around on Ancestry.com having a blast finding people in my tree and taking notes for future projects. As a result, I haven’t been writing and I haven’t done much reading. But there are a few books that I’ve read and I want to share them with you. 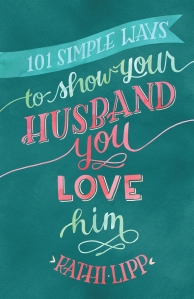 From the back cover: Speaker and author Kathi Lipp offers a wealth of creative ideas for how to love and encourage your husband to be the man God has called him to be. With each short, doable plan, you’ll not only bless your husband–you’ll bless the relationship God created when He brought the two of you together.

I had the privilege of writing way #60 in this book. Such an honor! If you’re looking for ways to bless your husband, this book is awesome!

I also read Full Steam Ahead by Karen Witemeyer, one of my favorite authors. This book published in 2014 and I had the thrill of meeting Karen and getting the book autographed. I just didn’t have time to read it until recently.  Can I just say that Karen has done it again?

Here’s the back cover info:

When love simmers between a reclusive scientist and a wealthy debutante, will they abandon ship or is it full steam ahead?

Nicole Renard returns home to Galveston, Texas, to find her father deathly ill. Though she loves him, Nicole’s father has always focused on what she’s not. Not male. Not married. Not able to run Renard Shipping.

Vowing to find a suitable husband to give her father the heir he desires before it’s too late, Nicole sets out with the Renard family’s greatest treasure as her dowry: the highly coveted Lafitte Dagger. But her father’s rivals come after the dagger, forcing a change in Nicole’s plans.

After a boiler explosion aboard the Louisiana nearly took his life, Darius Thornton has been a man obsessed. He will do anything to stop even one more steamship disaster. Even if it means letting a female secretary into his secluded world.

Nicole is determined not to let her odd employer scare her off with his explosive experiments, yet when respect and mutual attraction grow between them, a new fear arises. How can she acquire an heir for her father when her heart belongs to another? And when her father’s rivals discover her hiding place, will she have to choose between that love and her family’s legacy?

Before those two books, I read Whispers in the Branches by Brandy Heineman and Rich in Hope by Lindi Peterson. Brandy’s book has a genealogy thread that runs through it, so I was naturally intrigued by it. It also has a bit of mystery, and that was cool. Lindi’s book has a photographer in it and my daughter is a professional photographer, so I enjoyed it as well. Lindi writes in first person present, which was new to me. She hit the nail on the head!

Here’s the back cover blurb for Whispers in the Branches:

Tending a void in her heart that demands to be filled, Abby Wells uproots her life in Ohio to move into the ancestral home in Georgia. Now that her mom is gone, it’s her best chance to connect with the last of her family, and she can’t deny the pull of the supposedly haunted house. The seductive comfort of believing that ghosts could be real drives her search, but Aunt Ruby’s plans for Abby don’t include revealing secrets kept for seventy years. Oh, there’s dirty laundry she’d like to air—just not her own.
Indulging in the attentions of the house’s handsome caretaker helps numb her pain, but Abby’s ex-boyfriend won’t let go of the past. He hounds her about his new found religion in hopes of reconciling, but why reach for him or the God who couldn’t or wouldn’t spare her mom? In the stillness of the old house, the spirit world feels so close she can almost touch it.

But she doesn’t know yet that there’s more than one way to be haunted.

Here’s the back cover copy for Rich in Hope:

When beautiful underwear model, Jenny Harris, is scarred from a botched facial surgery she finds herself distraught and not in the Christmas spirit. Her best friend, Katherine offers her brother, Stephen’s, Florida waterfront home for a holiday sabbatical. But Stephen returns home unexpectedly. It seems the wild life photographer was somewhere he wasn’t supposed to be, again, and his employer has grounded him. While Jenny doesn’t understand Stephen’s lack of compassion for her situation, he doesn’t understand her obsession about her looks. When Jenny, in an attempt to help Stephen, announces to his boss that she’s his fiancé, a whirlwind fake courtship ensues. But Jenny soon finds herself falling for the renegade photographer who’d rather spend his time in the wilds of the jungle than in civilization. Will Jenny’s new perspective on life give her the hope she’s been searching for, or will it only lead to broken dreams and a broken heart?

If you’re looking for something to read, I recommend these books!