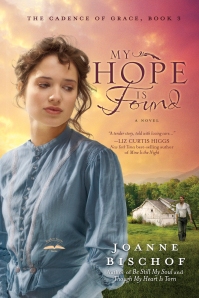 Have you read Joanne Bischof‘s Cadence of Grace series? If not, I highly recommend that you add this series to your holiday wish list. It begins with the forced union between Lonnie Sawyer and Gideon O’Riley. You love her and want to hate him but soon, you’re rooting for them to be happy. But their battle is an uphill climb all the way. By the end of book two, you can’t breathe. You don’t know what’s going to happen to your favorite characters and the new characters who have joined them in the Appalachian hills.

Book 3 in the Cadence of Grace series, My Hope is Found, brought the characters full circle in quite the satisfying way. I don’t want to give too much of the story away, but Gideon returns to Lonnie after his former wife grants him an annulment. But Toby McKee is working his way into Lonnie’s heart and at this point in the story, I wanted to scream. I wanted to read the last page to see how the book ended and just be done. But I couldn’t do it! I had to see where Joanne took these characters. It’s one of these stories where you plot and try to figure out what’s going to happen but you can’t because Joanne is so clever. So you’ll just have to read the series for yourself. I promise you will fall in love with each character, even the ones who don’t start out too lovable in the beginning.

Book synopsis: Gideon O’Riley has been given another chance at a life with Lonnie. But will the fight for her heart risk it all over again?

After finally finding love with his sweet bride Lonnie, Gideon’s heart was torn when a woman from his past claimed to be his true and rightful wife, forcing him away from his family. God’s merciful hand saw Gideon through the heartache, and with Cassie’s blessing, he is able to return home. But his journey back through the Blue Ridge Mountains will hold a trial he never anticipated.

Meanwhile, Lonnie determines to seal off her heart from Gideon, convinced he is lost to her forever. Strengthening her resolve to move on is her growing fondness for the handsome Scotsman, Toby McKee—the young reverend she has come to care for deeply. His proposal of marriage offers a bright future for her and her young son.

Yearning to allow joy back into her life, Lonnie must put aside the broken pieces of her heart that still love Gideon. When he returns to find her betrothed to another, he has to place his hope in God, trusting that the One who redeemed their love once can do it again.

Review of Book 1 in the Cadence of Grace Series

Review of Book 2 in the Cadence of Grace Series